Today I interview poet Eleanor Hooker, whose début collection The Shadow Owner’s Companion is published by Dedalus Press next week. Eleanor lives in NorthTipperary. She has an MPhil in Creative Writing from Trinity College and is Vice-Chairperson and PRO for the Dromineer Literary Festival. She is also helm and Press Officer for the Lough Derg RNLI Lifeboat. She began her career as a nurse and midwife. 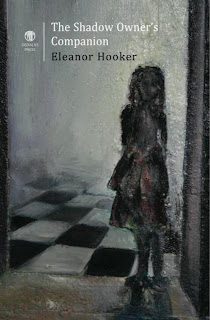 A big welcome to the Women Rule Writer blog, Eleanor, I always love to host poets here.
Thank you very much for having me here, Nuala.

Tell us a little about your collection The Shadow Owner’s Companion. Has it been a long time in the making? What were your triggers for these poems?
I guess like many debut collections, many of the poems have autobiographical elements.  It’s inevitable that poems reflect the poet’s life in some way, but I detest the term ‘confessional poetry’.  I think it is a pejorative tag used to demean poems and should be banned from the lexicon.
The oldest poem in the collection is ‘Granddad’.  I haven’t tweaked or re-worked it because it was written when I was very young and with an entirely different sensibility. Granddad died when I was fourteen.  Many of the triggers for the poems come from life events, while others are triggered by something I’ve read, heard or overheard.
‘Glow Stone’ was written for my elder son George.  He gave me a glow stone for my bedside (I’m still afraid of the dark!), so I gave him a sonnet.

For me this book has atmosphere, which is always welcome. There is a certain amount of menace in the poems, particularly with reference to childhood. Can you talk about that?
I like that it has atmosphere. Childhood can be an at times baffling and even frightening place.  When I look back, it seemed there was a system of rules that everyone understood except me.  I was a persistent day dreamer with a wild imagination, which often got me into trouble.
As a child I worried a good deal. I remember being taken to the cinema to see Bambi and Pinocchio - horror movies!  They tap into a child’s worst fears of abandonment, of being orphaned.  I never took my boys to see either of those movies.
I could never do something simply because I was told to, I always needed to understand why.  The answer ‘That’s the why’, so often given, never satisfied.

Like Ted Hughes, the pike is a recurrent motif in your poetry. What is the significance of that particular fish for you?
In my poems, the pike is a metaphor for every kind of menace. Pike are also known as freshwater sharks; they are predatory fish that prey on the living and the dead. Northern Pike have razor sharp teeth not only in their jaws but also on their tongues, the roof of their mouths and their gill rakers! If we catch a pike, we always let it go, poor fish!

Ghosts appear in your poems. Have you encountered ghosts or are these the fictional kind?
Our house has a reputation for its following shadows.  It can be pretty spooky here.

You enjoy working in forms, particularly the villanelle. Which comes first for you, the poem or the form?
The poem, or rather the idea for a poem.  Sometimes I find a particular idea needs to be contained by form, and I welcome the chant-like repetition a villanelle allows an idea within a poem.

You are a founder member of the Dromineer Literary Festival, as well as PRO for the Lough Derg RNLI Lifeboat. You are also a wife and mother. How do you prioritise your writing in the midst of all that busy-ness?
I am most productive when I am busy.  Our two boys are at university now and I am a full time volunteer.  We have a blast on the literary festival committee, we work steadily throughout the year and it only gets really crazy a month before the festival.  As well as Press Officer, I am also a helm on the lifeboat; it’s physical and demanding and inspires my poetry.  It’s good, I think, to have an active physical and intellectual life.

Why do you write?
Poems are a safe place to put vulnerable, breakable things.  Prose provides company.

What is your writing process – morning or night – longhand or laptop?
I jot ideas down in a notebook.  I would go through too much paper if I wrote longhand, so I transcribe my ideas to the computer and work from there. Someone told me recently that their poems start with a line, which they write down and work on later. I think that is so cool, I always begin with an idea, a concept. I’m a late night person.

Who is your favourite woman writer?
I couldn’t narrow it down to just one, but I had a look just now and I do have more collections of poetry by women on my bookshelf, than by men.

Which poet would you like to see on the Leaving Cert?
Is that not the kiss of death, I wonder?  Though I remember well the poets I covered for the Leaving Cert, and even if they didn’t much care for those on their Leaving Cert my boys do have an opinion on the poets they learned.  Perhaps the examinations boards are asking the wrong things of the poetry they put on the syllabus.

What is your favourite bookshop?
I love to visit the bookshops along the higgledy-piggledy streets in Hay-on-Wye.

What one piece of advice would you offer beginning writers?
Writing is hard work, so if a piece comes together too easily, then probably it didn’t get enough work and it will show.

What are you working on now?
I’m writing new poems, but also short stories that might someday form a collection.

Here is a poem from Eleanor's book, reproduced with the kind permission of Dedalus Press:
Glow Stone
for George
Hurtling past moon day’s unmade fields, past all
Those wasted hours farther back the same train.
Getting up to find you, a stricken trawl
Through storybook days, damped with fretful rain.
The same train, but your car grappled back to
Yesterday. I managed just to ravel
Time as it spliced my need to nurture you.
How could I let this happen and travel
Down the same lines as my parents?
Listen to me child; this is not the worst,
Please allow a moment for atonement,
We’ll snatch a piece of nevermore, but first,
Entrust me with that glow stone love, to creel
For night the light of day, a moon day’s steal.

You can buy The Shadow Owner’s Companion HERE. I wish Eleanor every good wish as she launches her first book.

A great interview Nuala. Thanks for sharing. I especially liked the response

'Writing is hard work, so if a piece comes together too easily, then probably it didn’t get enough work and it will show'

Though sometimes pieces arrive like gifts and need little tinkering.
But, yes, I am all for being one's own best self-editor.
Thanks for reading, Móna.

Thanks Nuala and congrats to Eleanor.

There's no way that Eleanor is old enough to have two boys at University...

Thanks for stopping by Michael and Peter.

I know, Peter - she looks way too young for that. All that fresh air, maybe?!

Congratulations, Eleanor. What a lovely interview, Nuala and Eleanor with some very poetic and beautiful insights into a poet's life and inspiration. Love the cover, by the way. Intriguing. And the sneak peak with George's poem is just beautiful.

Thanks a million for stopping by and reading, Shauna :)

I very much enjoyed this interview, Nuala. I loved Eleanor's poem. Congratulations to you, Eleanor.

Thanks Ór. She's a lovely writer and good interviewee, as evidenced :)

Congratulations on what sounds like a beautiful first collection - and with a fab cover. I'm very much looking forward to reading it - thank you both, Eleanor and Nuala, for a really insightful and zippy interview.

Eleanor is a marvel and an exquisite poet, and I'm not just saying that because she is my sister.


Thank You, Nuala, for posting this.

Hello John, and thanks for commenting. I fully approve of sibling support and you are quite right - she is a great writer. I look forward to meeting her in real life anon.
Nuala

A helm, a midwife, a festival PR and an accomplished poet. Next Eleanor's going to solve the current economic crisis

Yes, Eleanor - could you get onto that please?!
If you want something done, ask a busy woman...

Hi eleanor and Peter --this is jay from RCSI days here email me --please/would love to say hello congratulations on youtr collection . lets chat on skype --whatever--mo home address is in the us email is -jayfromakron@ yahoo.com. Love your poetry --how are the family?? send hugs to all..so good to see you both on the internet at the life boat launch..LOL-- ole'Jay