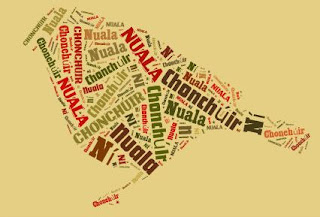 My name is pretty unpronouncable. I realise this every time someone goes to introduce me. I was doing workshops in schools the last two weeks; then a talk to an MA class; then a podcast interview with an American site - each time the person who introduced me either asked how to pronounce my name, or gave it their own special pronunciation. Irish, Americans, Antipodeans and Europeans alike have difficulty with my name. It doesn't help that my surname (which is the Irish for O'Connor, btw) sounds nothing like the way it looks.

So, here is the from-the-horse's-mouth guide to pronouncing Nuala Ní Chonchúir:

Nuala - pronounced NOO-LA (rhymes with 'hula', as in 'hula hoop')

Email ThisBlogThis!Share to TwitterShare to FacebookShare to Pinterest
Labels: how to pronounce my name, Nuala Ní Chonchúir

I will forever treasure this lesson ... And promise never to mis-pronounce it ever again. Have a great weekend!

Hahaha, Móna - big smiles! Have a good one with the chef and the kids. Noola x

Yes, but does the stressed syllable come on the 'cruh' or the 'hoor'? Vital information for poetic types.

Rob - let me be really awkward and say it depends where you're from :)
BUT, for me, it comes on the 'CRUH'.

Have to admit the only bit I had right was the Knee.

I need to print this out and take it with me to Little Rock.

Looks like this lesson was much needed then, guys :)

Thank you! I was doing all right on the first two parts, but the third... well, the lesson was very useful. ;)

I knew how to pronounce your name, Nuala. Except I stress the 'hoor'! Sure, isn't there a fada encouraging us to do so...?

It just depends. It's like the way some people put the emphasis on the start of Chonghaile, others not. It's a regional thing. I seem to remember in Kerry it was always ChonCHÚIR.

ah I remember way back in the day trying to pronouce it correctly and then making myself learn the correct spelling... seems like a hundred years ago now..

(btw I left a comment on your burning bush post the other day hmmmm I don't know what happened there, no matter now :-))

Oh bless you, I will get it right now, I promise!

How does the "ch" in the first syllable of Chonchuir attain that "r" sound? Fascinating!

Nuala, I've been trying to add you to my Twitter followers, but it is not co-operating. Will keep at it.

Hi Kar
No commments came through on the BB post so not sure what happened there?
N x

Kat - I have no idea. One doesn't have to think about it until one is trying to phoneticise it :)
Dunno re Twitter either!

My stress was misplaced! Have to say though - every kiwi I've told about your books knows how to say your name!
Now, if you could just point out a "for beginners" guide else I'm stuffed if I meet any other Irish writers with hula hoop mad hoor names.