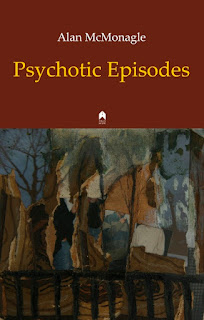 Alan is a poet, playwright and short fiction writer living in Galway. He has received awards for his work from the Professional Artists’ Retreat in Yaddo (New York), the Fundación Valparaiso (Spain), the Banff Centre for Creativity (Canada) and the Arts Council of Ireland. He has contributed stories to many journals in Ireland and North America including The Adirondack Review, The Valparaiso Fiction Review, Natural Bridge, Grain, Prairie Fire, Southword and The Stinging Fly.

Liar Liar, his first collection of stories appeared in 2008 (Wordsonthestreet) and was longlisted for the 2009 Frank O’Connor International Short Story Award. The title story from his second collection, Psychotic Episodes, (Arlen House, April 2013) was nominated for a 2011 Pushcart Prize.

Hi Alan and welcome to WWR. You said in interview, regarding short stories, ‘Stories are revelations, discoveries, confessions, little explosions. They attempt to be of reality and, at the same time, to stretch reality.’ Is the short story your natural 'home'? Or how do you see yourself as a writer?


Because I am a restless (as well as a spontaneous) writer my 'natural' home as you put it, Nuala, is wherever my energies are presently taking me. I flit anxiously and eagerly from form to form, and lengthy spells can pass before anything nudges its tentative way across the finish line. For me, it is a contradictory, mysterious, revelatory occupation - I have completed stories in one sitting and have yet to finish poems started years ago.

Essentially, in my writing I like moving from what I know (which isn't very much) and taking it towards what I don't know (which is vast). This is a highwire act. And the wire is invisible! So, sometimes I fail (fall!) and I admit this. So I start again and next time make sure I fail (fall!) better.

I know you count William Gay as a favourite writer. Tell us why that is and which other writers do you count as favourite short fiction writers and why?
William Gay achieved success at quite a late stage in his life. His writing takes my breath away. It is beautiful and stark and lyrical. He trips a switch, and fire and brimstone arrive. He has a hinterland. He knows twisted lives, he has wonderful comic timing, he writes some of the sharpest dialogue I've read. I recommend his collection I Hate To See That Evening Sun Go Down.

I also like the Russian Sergei Dovlatov. He tried for years to get out of Russia. A couple of years after he managed to get to America he discovered in a disused closet the suitcase he had taken with him. Inside the luggage holder were twelve items he had deemed important enough to take with him, and each of the dozen stories in his collection The Suitcase reveals how he came to be in possession of each item. I so enjoy his mordant humour. His matter-of-fact style. The absurdity and chaos of the world as he experienced it.

I will always have a place on my shelf for the Armenian William Saroyan. For his take on childhood. The confusion. The soon-to-be lost innocence. The human comedy of it all.

What story do you love? (You know the one that begs to be re-read over and over.)
Impossible to confine it to one.

Bullet in the Brain by Tobias Wolff. Six pages. An entire life packed into six pages. A brilliant set-up. An inconceivable continuation. A mesmerising final image. And, of course, it's about language and usage, how life can defeat a man, even a man so initially enthusiastic about the possibilities of existence.

In the Cemetery Where Al Jolson is Buried by Amy Hempel. This story proves that humour and tragedy co-exist...

Araby from Dubliners. For the language. For the concision. For the discovery the boy makes at the exotic market that gives the story its name. A painful discovery, something you would not necessarily wish upon one so young, but a valid discovery nevertheless.

Others stories I regularly return to include The Gospel According To Mark by Jorge Luis Borges; Symbols and Signs by Vladimir Nabokov; When We Were Nearly Young by Mavis Gallant; Emergency by Denis Johnson; The Colonel Says I Love You by Sergei Dovlatov; Last Night by James Salter (I think you would love this story, Nuala).

I know it and I do love it; I love its slant view. Salter is a genius.
You write long and short fiction, as well as poetry. Do you find a crossover of themes between them all? Or does each stand alone for you?
Well, a poem is a poem; a story is a story; and until it lands on the stage a piece of drama conveys purely through dialogue (spoken and unspoken). That said, because my stories contain a lot of dialogue I often finish a story and am asking myself can it be adapted. (I have adapted two recent stories into radio plays, for example.) Also, I try to be brief and I suppose this is partly how the poems arrive. Cutting lines I find more enjoyable than accumulating paragraphs (which is why my longer fiction is currently resting in an offshore drawer!) Ultimately, it is story I am attracted to, and how story arrives will usually influence its final shape - be it short  fiction, poem,  or piece of drama. Naturally, thematic considerations overlap, and more intriguingly perhaps, also the elements - narrative, dialogue, imagery, tone, structure and so on.

Humour is important to you as a writer. Are you drawn to funny work as a reader?
I try to use humour to bring something unfunny into relief. I don't always succeed, but when I do, it is very satisfying. Woody Allen says comedy equals tragedy plus time. I think humour and tragedy run together, co-exist. Beckett (again) was probably the writer most attuned to this. To paraphrase his own words, 'nothing matters, so everything matters.' Also, I think it was Chekhov who said happy people write unhappy stories and unhappy people write happy stories. Of course somehow blending these polar elements - the humorous and the tragic - is the ideal. Lorrie Moore is great at this. Her stories read: Joke, Joke, Joke, Joke, Joke, then comes the punch in the soul.

You have travelled a lot in South America and Europe. Do these travels influence your  writing?
Travels influence my reading. The Uruguayan Eduardo Galeano. The Chileno Roberto Bolaño. The Russian Sergei Dovlatov. The brilliant Pole Ryszard Kapuscinski. Next up for me is the Bulgarian Aleko Konstantinov and the Albanian Luan Starova.

Travelling hasn't influence my writing yet because I come with a delay mechanism! However, someone close to me has thrown down the gauntlet and suggested I put together a collection set completely outside Ireland. Knowing myself, I'll probably begin at the airport...

You hold an MA in Writing from NUI Galway. Do you think it is a useful experience and/or qualification?
The course is great for focus and discipline. A dream come true if you like to flit from one form to another. You can experiment. It's great for making like-minded friends. You will quickly feel part of a community. The qualification will provide you with credentials for future earning (teaching, editing, proofreading, and so forth) - because  if there is one definite in life it is that you are not going to make money from the writing that is part of your soul.

What is your writing process – morning or night; longhand or laptop? Are you a notebook user?
I tend to write in the morning and in the evening. I am not productive during afternoons. I like to start longhand. If it's 'firm' I will get to the laptop. I have a beautiful collection of notebooks from everywhere that I am terrified to spoil with clumsy scrawl. A writing friend of mine writes on whatever it is she has to hand - beer mat, napkin, loaf wrapper blowing in the wind. She impales these loose jottings on a spike file and every weekend she 'clears out' what she has accumulated, decides what is useful. This is a good system, I think.
What advice would you offer beginning writers?

You must persevere. Writing is a minority sport. It is a game you lose almost all the time. Read as widely as you can. Find your tuning forks. And re-read these.
If you have been spoonfed the principles of good writing do not be afraid to stray from them - especially if this is where your energies are taking you. If you are getting something out of what you have written, there is a good chance someone else will. Writing is an act of faith. And so, ultimately, it is its own reward. Remember, every day is the first day.

Readers, you can read more about Alan and his upcoming readings, events etc. at his website here and you can buy Psychotic Episodes online or in person at Kennys and other good book shops.
Posted by Group 8 at 08:00

Great interview Nuala - and great answers Alan. Congrats to both of you - two writers who aren't afraid to bring a bright intelligence to everything they do!

Great interview, Nuala and Alan. I love and also completely identify with the delay mechanism with regards writing about places you've been to - or indeed, experiences. And also the wonderful reminder that 'every day is the first day'. I look forward to reading the collection, Alan, congratulations!

Thanks for reading, Shauna. Great answers from Alan, methinks.