Here's something to brighten up your Monday: début writer Aileen Armstrong at the blog today, with a guest post entitled 'The Roots of Preoccupations'. Aileen's first book, a linked short story collection called End of Days, has just been published by the fabulous Doire Press who are based in Connemara, County Galway.

The book will be launched on Saturday the 14th September by Declan Meade of The Stinging Fly at Galway Arts Centre at 1pm. Aileen, who grew up in Sligo, now lives in Galway. Her writing has appeared in Galway Stories, the Stinging Fly, and Long Story, Short. She holds a MA in Writing from NUI Galway. 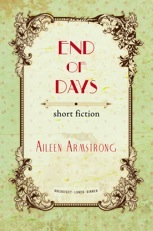 If you can't wait 'til Saturday to read it, buy the book here now.


The Roots of Preoccupations

When I was twenty, I spent an Erasmus year at university in the south of France. Back in those days, I didn’t know any writers, and I had already (and prematurely, as it turned out) abandoned any attempt at writing creatively myself.  Even so, it seemed to me that Erasmus years were the stuff of fiction-makers’ dreams. All of that youth and uncertainty, the language mash-up, the cultural pleasures and the cultural absurdities. Somebody should write a novel about Erasmus students, I thought. Somebody, somewhere, should mine this fount.

I took a class, in my French university, that would focus on the American short story. The class was taught in English, and only two authors were examined: Raymond Carver and Hermann Melville.  My feelings about Carver are for another day. But via Melville’s short story collection The Piazza Tales I was introduced to Bartleby the Scrivener, and anyone who has encountered Bartleby won’t forget him. Bartleby, a pallid notary taken on by a Wall Street lawyer, performs his documentation tasks admirably at first. It’s not long, however, before he is trying the patience of his colleagues and his employer. To repeated injunctions to perform office duties, or do anything at all, he has but one mysterious, minimalistic response:  ‘I would prefer not to.’ Eventually, the lawyer discovers that Bartleby has been sleeping in the office – that he does not, in fact, ever leave the office, but continues to occupy its space with his ‘passive resistance.’

In later years, after graduation, I worked for a long time in an office not unlike Bartleby’s, doing work that was not unlike Bartelby’s. And often, when I was working alone well into the evening, chasing a deadline, I would be struck by the same kind of melancholy a first reading of Bartleby invites. It seems to me that the stories we read earliest – or perhaps the ones we read best – do this to us. We hardly notice it, but their patterns or images become settled in us. They become part of our sensory make-up.

I didn’t write that novel. And maybe I didn’t exactly write short stories either, since the pieces in my collection – End of Days, Doire Press – are lightly linked, meant for reading in sequence. Still, in one of them, the title story, an Erasmus student spends Christmas alone in her flat aware of, but removed from – possibly even passively resisting – the festivities that are taking place in the busy bar on the ground floor of her building. And it’s only now that I’m writing this that I can see where the roots of my preoccupation – with solitary souls in communal buildings? – potentially lies, and I’m amazed, as I often am, at how much time I seem to need to process things.

That class on American short fiction was a bit of a disaster, truth be told. But if I got nothing else from it, I still got Bartleby. He was more than enough.

During my brief life as an office slave I used to read (and re-read) Conrad's Heart of Darkness. A supervisor (from an entirely different department) used to stick his head around and say to me, "Is there an issue?". "No," I would reply and continue reading. Great post, Aileen. Makes me want to re-visit some of that 'early' reading...

Thanks for stopping by, Alan. Enjoyed your comment. Hope you enjoy the revisit to Conrad.

A great read, Aileen. Very curious to have a look at your stories. And I'm wondering who was the Bartleby in my life? Thanks Nuala. Ciao cat

This rings true, I think, not just what we read, but the stories we tell - how we revisit them (or I do) as if the perfect telling of them has yet to be told...stories we go back to. Lovely post, Aileen - I look forward to reading your collection - congratulations on the publication.

Rachel - true for me. I go back to Seán Ó Faoláin's 'The Trout' over and over. It's like my comfort story.