I am living my fantasy just now - Penguin USA and Penguin Canada are going to publish my third novel, Miss Emily, which is about Emily Dickinson and her Irish maid. All thanks to my supersonic agent. There was even an auction! Most definitely the stuff of dreams.

I received the news in Wales on Tuesday the 4th where I was in residence at the Gladstone's Library in Hawarden. My fellow resident and friend, writer Tania Hershman, bought me champagne and Creme Eggs to celebrate. Isn't that the sweetest? We then went to the pub in the village, The Glynne Arms, with fellow writers Neil Griffiths, Rebecca Abrahams, and Philip Clement, who interns at the library.

My week in Gladstone's was wonderful (beautiful food, great company, long walks in the castle park) though taking updates via phone from the USA, and chatting with various editors, had my head turned backwards. TG I managed to get done what I needed to do each day before New York woke up. It was (is) a whirlwind. And I feel utterly blessed. 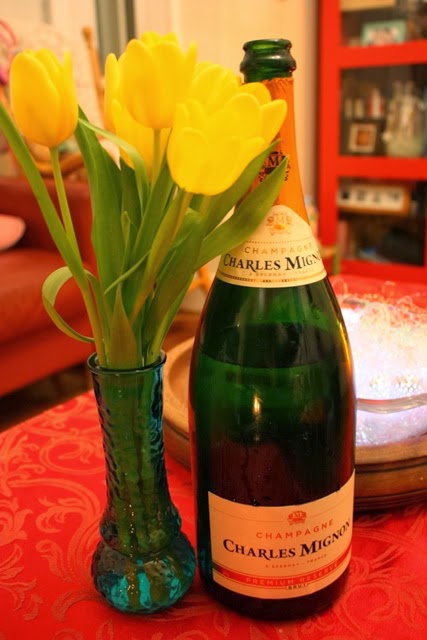 There was more champagne (a magnum!) - and tulips - waiting for me at home when I got back from Wales. Myself, my husband, the kids, and my ex- raised a glass (or three) and I felt super lucky all over again. Penguin announced the deal in the USA today so I am finally allowed talk about it. Relief!

This is what Publishers Weekly wrote today in its Book Deals section:

Penguin’s Tara Singh Carlson took U.S. rights, at auction, to Nuala O’Connor’s debut novel, Miss Emily. Grainne Fox at Fletcher & Company brokered the deal, and said the novel is reminiscent of The Girl with the Pearl Earring. The work is told through the dueling perspectives of Emily Dickinson and her Irish maid, Ada Concannon, as their lives intertwine. Adrienne Kerr at Penguin Canada preempted Canadian rights to the book.

Yes, I am reverting to my birth name for this book. Much easier for my North American friends to pronounce and spell, after all.
Posted by Group 8 at 12:51

Thrilled to bits for you!!! Just awesome.

Thanks so much, Mari. It's brillo!

What wonderful news Nuala, congratulations, this is great to here! x

Thanks a mill, Alison. I feel I may be proving Anne Enright's 'The first 12 years are the worst' statement. My first book came out in 2003.

Thanks, Eileen, I feel lucky!

Yes! Congrats, and I can't wait for the novel. Will tell all my bookseller friends to look out for it.

Cheers, Rich. In the meantime Novel 2 'The Closet of Savage Mementos' is out in April from New Island!!

Brilliant news, Nuala! Congratulations and how wonderful to be published in America.

Thanks so much, Ór. Penguin is just my dream :)

Congratulations -- definitely one to add to the TBR pile.

Oh Nuala, the stuff of dreams indeed, and it's not just luck either. You made it happen for yourself because you are a powerful, imaginative writer. Congratulations Nuala and may the book be the huge success it deserves to be.

I am so so thrilled and delighted for you! Yippee times a few thousand xxxx

Brilliant news and well deserved. Can't wait to read it.

Great news, N, congratulations! I bet though you wish you could witness the various American attempts at pronunciation/spelling...

And Canada, I meant to add!

I'm so so happy to hear that Nuala! Its so utterly well deserved, and bout time too:) And fabulous! Congratulations, congratulations! x

Thank you all so much, very kind of you.

Mary O'Donnell - a special thank you :)

Akis - believe me I have had my name mangled by various nationalities (including Irish) as you no doubt have too!

Wow, congratulations Nuala. It's heartening to see you achieve this as it is so well deserved. Well done and enjoy. Deirdre.

Nuala! Wow! Comhgairdeagas leat, a chroí! :-) Gliondar orm duit!
I have a poem about Margaret Maher in my next (English) collection of poems, so I'm absolutely intrigued to read this book. Intrigued, I tell you! Fantastic to see such an amazing writer do so well, more power to you!

Its brilliant watching your star soaring into the firmament. Thoroughly deserved! Many congrats!

CONGRATULATIONS! This is the best news! You deserve this so much!

I'm doing a Penguin dance for you, Nuala. Bravo! Brava! Whew and love!

Oh wow! I am so thrilled for you & fierce excited to read Miss Emily. Well done, Nuala. If there's anyone who deserves this, it's you. Love your work. Treise leat!! D.

Lovely news and it sounds intriguing.

And there I was thinking you had written a novel about little ole me.....!!!!!! ;-) I am so extraordinarily thrilled and excited for you, so very well deserved xxxxxxx

WOW. I am so thrilled for you. I've only read three of your books so far but am totally smitten with them. Each day before I work on my own novel I read your poems for inspiration. Your hard work has paid off and I will continue to spread news of you over here!

Huge congratulations, Nuala, America and Canada here we come - delighted for you and really looking forward to reading Miss Emily!

Oh, how fantastic. Congratulations as it's well deserved!

I am so happy to hear this wonderful news! So well deserved too. Onwards, upwards...
XX

Hey Nuala, brilliant brilliant news, so pleased for you and very curious to read the book. When is it out? Lane