It has been a long, long week since I got back from China. I spent the last two days of my Shanghai trip confined to my hotel room with food poisoning which was not fun. I also fainted at Shanghai Airport and woke up on the bathroom floor (with a sore head) surrounded by kindly airport officials who called doctors (help comes in multiple figures in China). Mortified! Anyway, I was let on the plane but it was a long, hard flight and the combined smell of noodles and perfume almost did me in. I got home eventually and have had a bit of a lost week of sleep, sickness and general dullness (with two exhausting forays to Dublin for a gig and a wedding.) Whatever bug I picked up does not seem to want to let me go :( 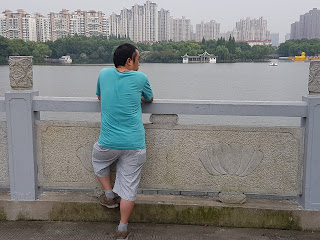 Anyway, up to that point the trip went well. We got to see a little of the city (vast, smog-lidded, high rise blighted) and we enjoyed the International Short Story Conference as always. It's lovely to re-connect with old friends/short story lovers.

My husband and I had some time to explore Shanghai so we went to a bazaar (again, vast) and to the aquarium (I love belugas and they had three), to lovely Changfeng Park (beside our hotel) and to the Bund to see the amazing modern buildings. The heat was incredible (30 to 35C and humid) so we would walk for a bit, then hide for a bit in anyplace that offered air-con.

Food was difficult for us as veggies so we did not dine well overall and I have no idea where I picked up the bug. Maybe an ice-cream bought from a park stall? Or one eaten in YooShake? Who knows...

The Irish contingent were delighted to have dinner at gourmet vegetarian restaurant Dashu Wujie at the invitation of Zhao Lihong, director of the Shanghai Writers' Association. The food was incredible: lotus hearts with asparagus, teeny tiny courgettes, tofu and seitan done in many ways, avocado wrapped in beetroot etc. We talked Cork (Zhao Lihong has been published there),Yeats, Wilde and the Irish language with the help of interpreters.


At the conference, which took place in the East China Normal University, I enjoyed many readings by the likes of Gish Jen, Yiyun Li, Robert Olen Butler, Clark Blaise, Felicity Skelton, Katie Singer and her daughter Kayla, and my friend Alan McMonagle (we read together).

I really, really enjoyed the panel of New Zealand writers who were as down to earth and vibrant as one might expect. NZ author Frankie McMillan also gave an interesting paper on flash fiction which is having a renaissance in her county. Inevitably at a conference so vast it is impossible to get to everything but, considering I felt pretty unwell most of the week, I got to lots.

There weren't many books for sale at the conference but I managed to get Gish Jen's s/s collection Who's Irish? and it is totally brilliant - funny, deep and informative on the Chinese immigrant experience in the States. 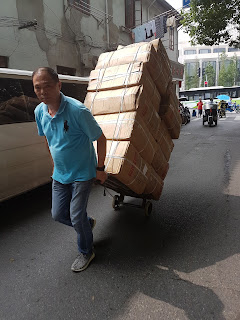 Shanghai was as hectic and strange as I'd expected (it was my first time to Asia). The clichés stand up: lots of overloaded bicycles transporting odd goods; funny signs 'translated' into English; lots of hawking, nose-clearing and spitting; copious amounts of bullfrog and pig intestine on restaurant menus; a sweet and friendly populace. 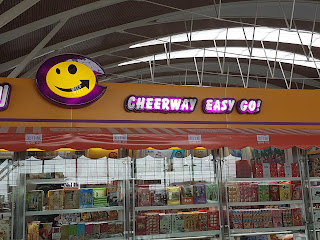 Because my eating forays were so haphazard over there, I took pics of cakes especially for John Foyle, who always enjoys the foodie aspect to my travel posts. Here you go, John. Enjoy!

Great read Nuala and you sure packed in plenty. So sorry to hear of the Shanghai belly [which phrasing I adored! :)] Hope you're well on the mend. How lovely to see it through your gaze. Continued healing. :)

Gah, food poisoning sounds stink, glad you got to do some sightseeing before it got you though. Ta for posting great pics -- lovely one of my mate Leanne and the NZ contingent -- wish I could've been there!

Thanks, Mari.
Shanghai Belly appears to want to stick around for another while. Grrr. Just heard last night that one of my fellow travellers, who stayed on to go to Beijing, was similarly afflicted. But had to soldier on. In the heat. Arrgghh! At least I was home in my bed.

Thanks for reading, Rae. Yes, goddamn food poisoning, and it goes on and on.
Leanne told me you were friends, it was lovely to meet her. The NZ crew were very impressive, I found.

Thank you so much for sharing this, it looks like you had a fab time - apart from the food poisoning. Hope you're feeling better. xx

I missed you, Tania!! Wasn't the same without you, me dear x x x (The next one is in Singapore but I may have had my fill of the Far East...)

Indeed!! Congrats on s/s collection news, that's fantastic. S/s conf may be in Cork again in 2020. I would LOVE if Manchester would pitch for it, have never been.

Thanks for kind comments about the NZ short story panel - glad to know it wasn't just entertaining to those of us who were doing most of the talking. I'm sorry I didn't get to meet you while we were in Shanghai, but perhaps that can be a pleasure deferred (if you get the urge to come to NZ sometime, for instance!)

all the best, jack

Hi Jack,
Thanks for your comment. The NZ writers were great and I learnt a lot at your panel and at Frankie's paper. I love NZ writing anyway but now have a new list of writers to seek out. Having spent time in Scotland myself I was interested in your Scottish odyssey too. A great country.
Thanks a million!
Hope we meet anon.
N