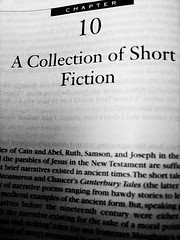 I’ve had a few deadlines this week so this blog has been down the list of priorities. The conference in Cork was fantastic, as I knew it would be. There was an overwhelming amount of events but I will try to report on my highlights, at least.

One great thing about such a vast conference is discovering a new writer. And so it was that I ambled along to a set of papers on Canadian fiction to hear about Mavis Gallant (my new favourite Canadian writer) only to discover a further ‘new’ Canadian writer, Michael Trussler.
I enjoyed Michael’s paper so much I made sure to get to his reading and it was brilliant. His story ‘Angels’, from the collection Encounters, was funny, vibrant, off-the-wall and had that undercurrent of darkness that’s so important. (Lucian Freud’s ‘little piece of poison’.) His collection was for sale there, so I bought it, but it can also be purchased from NeWest Press.

A panel on 'The Irish Short Story Today' had William Wall, Mary Morrissy, Claire Keegan and Colm Tóibín in conversation. Each had something good and interesting to say.
Claire: ‘Fine stories are told with reluctance; they waste little.’
Bill Wall wondered why Ireland never had an avant garde literature at home, with writers who stayed in Ireland. Mary Morrissy reckoned it was because a lack of luxury (material wealth) does not promote an avant garde. Claire thought that there was, and is, no reward for experimentation in fiction but maybe that would change with poverty. ‘Having little is the territory of the short story,’ she said. (Roll on the recession! Oh wait, it’s already here apparently. Yippee! I, for one, am glad of it.)
Bill Wall said ‘Maybe we need a poetics of anger.’
Colm Tóibín was witty and engaging, as always; he recommended we all read a story by Daniel Corkery called 'Nightfall'. Which I shall read as soon as I can get hold of it.

Robert Olen Butler and Bharati Mukherjee did a reading at Triskel Arts Centre on the Friday night. Both were excellent. She read a story about an affair between a young Indian woman and an older man that had delicious surprises in it. I think it was from The Middle Man and other stories but I can’t remember the title of the story.
Robert read from Intercourse, his wonderfully inventive short shorts book, and we heard from everyone from Mary Magdalen to Hillary Clinton. He is a confident and inventive reader and the audience enjoyed his reading hugely. Well, I did for sure!

Another highlight was Edna O’Brien’s reading on Saturday evening. She looked elegant and serene and she spoke with calm force, quoting from Yeats and Byron to illustrate her thoughts. She talked abut the difficulty of being a woman artist and the importance of women supporting women (hear! hear!). She said she writes by hand and re-writes by hand and she also said: ‘When I put pen to paper, sorrow invades the pen.’ Having said that, her story about a naïve young girl at a party in County Clare, was blackly funny. I thought she was wonderful. Claire Keegan said to me afterwards, ‘I was proud of her.’ I was too.

There was an art exhibition run at Triskel Arts Centre, in conjunction with the conference, whereby graphic art students at the University of Central Arkansas chose one story by a participating writer, and made an image based on that story. One of my stories The Sea Saw was the only Irish one chosen (so proud!) and a student named Shelby Watkins did a gorgeously poignant and energetic picture based on it. Thanks Shelby!

You don’t need to hear about my reading or editors’ panel – let it suffice to say that both went off hitchless and I enjoyed doing them. The launch of Southword at the City Library was also fun. See Tania's blog for a report.

The conference, and all about it, was great. It renews my confidence in this life I’ve chosen and it makes me hopeful for my work and my life as writer. It makes me feel like there is somewhere that I fit in, that I belong, and that’s a great feeling. So thanks to Dr Maurice Lee, Dr Susan Lohafer and Ann Luttrell and their teams, for their indecent amount of hard work that pulled off such a wonderful event. Long live the short story.
Posted by Group 8 at 10:08

One writing friend, also at the conference, said in a mail to me, re Edna O'Brien:
'It was like hearing a national monument speak - and SO well too. She collects the entire country together each time she does anything. Edna still has the dreaded fields, but she also has people and their innards, doing real things.'
Wonderful!

Oh it sounds wonderful. I think I am just going to have to move to Ireland....there's so much going on over there with you lucky peeps.

It might be of interest to you to know that William Wall has gone on to write an article regarding the 'poetics of anger' (mentioned in the report).

the article can be found here:
Riding Against the Lizard - On the need for anger now.
Towards a poetics of anger

Hi Mc
THanks for stopping by. I've read Bill's article (I know him!) but thanks for the heads up anyway,
Best
Nuala