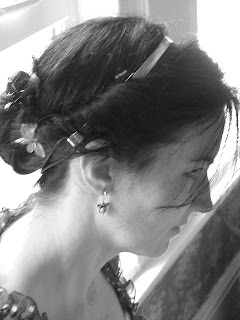 Órfhlaith was born in Africa to Irish parents and lives in Galway. Her first novel Belios was published in 2005 by Lilliput Press to critical acclaim. Patrick McGrath called it 'a dark, rough, funny novel about a dying genius'. A collection of Órfhlaith’s poetry and short stories, Revenge, was published in September 2005 by Arlen House. She is currently working on her second novel.

Firstly a big welcome to Women Rule Writer, Órfhlaith , and congrats on the publication of Red Riding Hood’s Dilemma.

Hello Nuala and thank you for inviting me on your blog. Thank you for your questions also.

You were born in Nigeria and lived in various parts of Africa as a child, and it features in many of your poems. What has Africa’s influence been on your writing as a whole?

It made me a reader. We lived in countries where television was either non-omnipotent or it was banned. So I read everything I could get my hands on. Also my mother is a great reader and I remember our book shelves in Malawi were full of Shakespeare, Dickens and newspapers.
Also living in Africa and being white made me realise that the world just didn’t follow straight lines and it made me curious. So I asked questions even though I knew there were some questions you never asked because you didn’t know who was listening.
Africa is a country that is romanticised via Karen Blixen; Elspeth Huxley: the ‘White Highlands’ set; various films and famines. We lived there as children and so to us it was a normal childhood and Ireland was foreign; even though we realised we were the foreigners in Africa, it was still our home. Our parents had friends both black and white and being a child, I don’t believe we bothered with anything other than making friends and going to school.

I am always conscious of the white African label. I don’t live in Africa anymore and sometimes I have to remind myself that I grew up there. Your childhood informs your work as a writer. You cannot escape it and growing up in Africa; I saw the absence of certain things. People disappeared; you were advised not to talk about things and I loved to talk. I was constantly given out to for telling secrets; not because I wanted to but because the words just got out.
I used to look at South Africa and be glad my parents never brought us there. I could not understand the whites there. They seemed so far removed by the whites I knew. But I only saw things from a child’s perspective although I was grown-up for a child.

Africa has and had such extremes of experience for me. There were friends in school whose lives were so different to mine, almost dangerous and yet we played rounders, giggled in the tuck-shop queue, visited each other’s houses yet there was always this membrane of difference between us. The difference was that my experience of Africa would never match the experience of the girl sat next to me in Sir Harry Johnson’s primary school. I could weave in and out of adult conversations and know that certain words were codes for something else. I could ask my friends questions that they just couldn’t and wouldn’t answer.

So Africa made me realise that people hid things; they used certain words and your colour of skin categorised you. It’s influenced my writing in that I have always being fascinated by why and how people hide themselves. I am fascinated by difference and how it can either foster love or destroy it.
I could have got these fascinations if I grew up in Ireland perhaps but never to the same intensity. There was always something disturbing about living in a country where you were the colour of the finished yet recent colonialists.
Africa today still has extremes. Black and white Africans are still eyeing each other but I would not give up my childhood in Africa for anything.

Fascinating stuff.
Questions of religion – or the questioning of belief – arises often in your poetry. Do you think poetry is helpful or important for exploring personal beliefs?

This sort of question makes me squirm. Poetry has always been mysterious to me. I readily admit to not being an academically astute poet. I know the differences between a sonnet and a villanelle and poetic parameters can be good training for a poet, but I have always been lured by feeling most of all.
So how I feel and how I believe does come out in my poetry. It’s odd but I have always been conscious of how many ‘I’ poems I write and they are not always me! I believe that poetry reaches into you and your outward looks may never show it but you can be changed by poetry or at least arrested.
I have still so much to learn as a poet and that both frightens and enthrals me. I believe that the human heart and mind are as worthy of exploration as far distances or oceans are.

Religion, I cannot divorce myself from it. I don’t want to either. Why should I shut down that questioning part of me when it makes me see that the world is so much stranger and beautiful than I ever gave it credit for?

Poetry is personal. Before Red Riding Hood’s Dilemma came out, a poet I know said to me: ‘Now I’ll know what you’re like.’ So I suppose you do open yourself through the poems you write but for some reason it does not sit as easy as writing on Facebook or a blog. I think it’s easier to hide on social networks, no matter how creative you are.

Poetry can show you to yourself yet it also shows the world to yourself. It’s crazy to do it. But I admire crazy.

Sorry for making you squirm - I know the feeling!
There’s an international feel to this collection; apart from Ireland and Africa, there’s Russia and France. How important is travel to you as a writer?

I suppose it goes back to the ‘difference’ angle as well as my childhood. The one thing that we are all encouraged to fear in this world is difference. Travel does that most clichéd of things: it broadens the mind and as a writer it stretches that visual panorama in your head. My parents took a chance on the world so I’m always grateful to them.


You write full time. Could you describe a regular working day?

I’m disciplined. I begin work early in the morning and I work until early afternoon. Whatever I am working on takes priority. Sometimes I get nervous as I approach my desk but once I start, I keep on going. If I’m not working on anything, I read or daydream. Afterwards, I like to run to get out of my head and sometimes I bake chocolate cake.


Who are your favourite female writers and why?

Flannery O’Connor – never apologised for the way she wrote and the odd, violent people she created always had humanity.

Katherine Mansfield – read ‘The Garden Party’ for those last scenes.

Emily Dickinson – the way she inverted, contorted and created poetry.

There are more but these are ones who are always on my desk.


What two or three pieces of advice can you offer the fledgling writer?

Read books – some writers don’t and their imaginations crumble.

Foster your own writing process – takes a while to understand yourself and how you write but once you have the feel for you own work, don’t compare it to that of others.

Write with your guts.

Thanks so much, Órfhlaith, for such honest and insightful answers; I've really enjoyed our chat. I wish you tons and gazillions of good luck and continued success with all your writing.

Órfhlaith's books can be bought from Kenny's Irish Book Shop and The Book Depository.
Posted by Group 8 at 11:24

Thanks for this. I've met Orfhlaith in person several times and it was great to read this interview too and read her experiences of white-African childhood. It's an interview that make my feet decidedly itchy.

Fascinating interview, thanks to both of you. I'm curious to get the book now and will do so in August!

Thanks, girls. Yes, I too really enjoyed Orfhlaith's answers. Very interesting, like the woman herself.

I was thoroughly engrossed in that interview, ladies, thank you.

Great interview, thank you both for sharing. Fascinating childhood, I’ve a million questions swirling in my head that I’d like to ask Órfhlaith. I love Red Riding Hood’s Dilemma, it’s been in my bag since I bought it and I love it!

Thanks Kar - I know, it's fascinating to hear about it all isn't it?
N x

Very interesting review, Akis. Good stuff. I enjoyed your insights into Órfhlaith's poetry.
Thanks so much for linking.

What a great interview, so much in here, so many themes and questions. I really look forward to reading your poetry, Orfhlaith. Were you a little nervous when that person said ‘Now I’ll know what you’re like’ about your poetry?

Tania - Órfhlaith doesn't have a blogger account and I can't answer for her, but I know I would have been slightly creeped out by that comment!!!! It's bad enough putting your work out there without thinking about being dissected!

Lovely interview: great to hear more about the writer's background - but I am really inttrigued by the work, more importantly :)

Indeedy, B. Thanks for reading.

It's great to read how Orfhlaith's literature celebrates her privilege of having lived in and seen so many parts of our world.