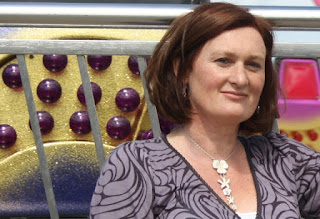 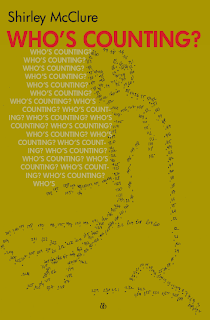 I'm delighted to welcome Shirley McClure for an interview about her new poetry collection Who's Counting?. Shirley won the Cork Literary Review Manuscript  Competition and was runner-up in the 2009 Patrick Kavanagh Poetry Award with this collection, which has just appeared from Bradshaw Books.

Poet Katie Donovan says of Shirley's work that it is “quirky and wise, studded with razor-sharp double entendres and droll fantasies, these poems introduce a refreshing new voice in Irish poetry”. For me, her work is clear, crisp and witty, but also full of insight and pathos. I found it a very enjoyable collection to read and it tells a few stories which is always satisfying for a reader.

Shirley will appear on RTÉ Radio 1's Arena on Tuesday the 2nd November at 7.30pm.
Welcome to Women Rule Writer, Shirley, and congratulations on the publication of Who’s Counting.
Thanks for having me, it's great to be on your gorgeous blog-spot.
Many of the poems in your collection are very sensuous, sometimes sexual. There are also very beautiful love poems. Do you find freedom in exploring the sensuous in poetry?
I find freedom in writing about whatever is obsessing me at the time - death, dating, our dog. Once I started writing the love poems I found, as so many others have done before me, that there's a lot to mine, in terms of language and humour. It's good clean fun.
The poems are often wry and always modern. I’m thinking of the title poem ‘Who’s Counting?’ where the lover wears a French Connection shirt and braises tofu and the final lines read ‘[you] said you loved me/on the sixty-second date’. Are there any poets you would cite as influences on this style of writing or do you feel it’s purely your own sensibilities coming through?
I enjoy poets like Adrian Mitchell ('A puppy called puberty') and Billy Collins ('Sailing alone around the Room') for their conversational styles and bold ideas. I like language that sounds colloquial better than 'poetic' writing. I am amazed by how Sharon Olds, who writes so strongly about the sexual, can pack such a punch on her final lines, as in her incredible poem, 'I go back to May 1937' (Selected poems), where Olds points out to her parents in a young photograph of them, that they are 'going to do bad things to children'; she ends, reverse-prophetically, 'Do what you are going to do, and I will tell about it'.
If I could write like any of them...
I'm a huge Sharon Olds fan myself - oh to write like her!
In the poem ‘Remembrance’ there is a crude, sectarian intrusion on grief. Would you like to comment on being a Protestant writer in a culture that is dominated by Catholicism? Does your religion inform your writing, do you think?
I must say that the taunt, “She's a fine arse/ for a Protestant!”, struck me at the time because it was so rare, and my experience of being brought up as a Protestant in the South has been a very peaceful one.
I think the main effect of being part of a minority religion was to instill a sense of difference, or separate identity. This is no bad thing for any writer, as writing is often, I think, a way of finding and expressing our individuality.
I certainly feel that my early church-going years helped to nourish a love of language- the poetry of the King James Bible, and the hymns and poems of George Herbert in their unembellished power were definite influences.
Conversely, I lose out on the richness of symbolism that Catholicism offers- I was taught from an early age to eschew symbols and have not been able to shake of that Presbyterian taboo- I take things literally!
The poems about mastectomy come across as very positive, which is a feat in itself. Was this a deliberate decision or did the poems just emerge that way?
I started writing about the experience of mastectomy a week after the surgery, encouraged by my surgeon to do something I loved doing. It was such an intense experience, shocking and painful but cushioned by the camaraderie of the ward and the support of my friends and family, I just had to write about it. I don't see the poems as wholly positive, more that they attempt to express that pain but are accompanied by the voice in my head that refuses to take myself completely seriously. No, it was not a deliberate decision, the poems came along in that form.
A number of women have come up to me after readings and told me of their own experiences of breast cancer, which is very moving and encouraging too.
I ask this question of all women visitors to this blog, Shirley: Who are your favourite women writers and why?
I have mentioned Sharon Olds, her honesty knocks me for six. I enjoy the Zen-like poems of North American writer Jane Hirshfield ('After') and the immensely clever and original language of Carol Ann Duffy. 'Mrs. Midas' is a delight. Irish women writers I particularly like are Katie Donovan for her sensuous, tender and sometimes shocking poems ('Rootling') and Rita Ann Higgins, whose 'Hurting God' I'm reading at the moment. I heard her read at Electric Picnic this summer, she is so naturally funny and really gets in under the dusty carpets of Irish life.
Shirley, thanks so much for your wonderful responses. It's been a pleasure to have you here.
Readers, you can buy Shirley's book by phoning Tigh Filí on +353 21 421 5175. It is also for sale in Books Upstairs on Dame St in Dublin; Dalkey Book Exchange, Castle St, Dalkey and Bridge Books in Wicklow town. Or from the author via www.thepoetryvein.com

Her book would make a lovely Christmas present for anyone - poetry lover or not.
Posted by Group 8 at 18:07

Thoroughly enjoyed this interview ladies - thanks Nu, and Thanks, too, to Shirley - I'll definitely be reading you.

It's a powerful collection which I keep coming back and back to, and a great interview, thanks Nuala and much love to you Shirley xx

Very interesting interview, oh to sit and share a pot of tea while listening to the pair of you ;-)

Tales from the Birch Wood. said...

I'm delighted to have found your blog.

Such a vivid and insightful interview.

Thank you for sharing.

Thank you, Tales, and you are welcome here. Nice to meet you! Nuala