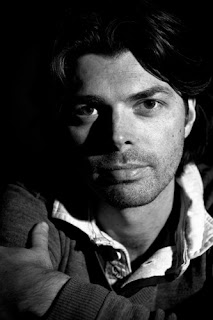 A big welcome to the Women Rule Writer blog, Adam, I always love to host poets here.
Tell us a little about your new poetry collection Silent Music. The poet’s eye, in fine frenzy rolling,
doth glance from heaven to earth, from earth to heaven.

We started in Africa, the world at our fingertips,
dropped in on your house in Zimbabwe; threading
our way north out of Harare into the suburbs,
magnifying the streets – the forms of things unknown,
till we spotted your mum’s white Mercedes parked
in the driveway; seeming – more strange than true,
the three of us huddled round a monitor in Streatham,
you pointed out the swimming pool and stables.
We whizzed out, looking down on our blue planet,
then like gods – zoomed in towards Ireland –
taking the road west from Cork to Kinsale,
following the Bandon river through Innishannon,
turning off and leapfrogging over farms
to find our home framed in fields of barley;
enlarged the display to see our sycamore’s leaves
waving back. Then with the touch of a button,
we were smack bang in Central London,
tracing our footsteps earlier in the day, walking
the wobbly bridge between St Paul’s and Tate Modern;
the London Eye staring majestically over the Thames.
South through Brixton into Streatham –
one sees more devils than vast hell can hold –
the blank expressions of millions of roofs gazing
squarely up at us, while we made our way down
the avenue, as if we were trying to sneak up
on ourselves; till there we were right outside the door:
the lunatic, the lover and the poet – peeping through
the computer screen like a window to our souls.

Very interesting interview, I really enjoyed it. Adam is not a poet I'm familiar with, thankfully you've changed that. The poem is fantastic and leaves me hungry for more, it brought back memories of our trips around London and Brixton Nu ;-) anyway I'm off now to treat myself to the book. Thanks for sharing
x

Hello Adam, we met at the Frank O'Connor fest in 2008! Great interview, thank you both, am heading off to buy Adam's book, I love the Google Earth poem. What a strange world we live in.

Thanks for the comments, ladeez. I'm sure Adam is delighted to be getting new readers :)

Just what I needed to read right now - been doing a dance with my poems today and I couldn't find the right steps - now I think I'll call it a new dance! Lovely interview - and the google poem is fab, especially like the AMND link - my fave play of Will 'speare's!

Great interview and really enjoyed Adam's responses. I've read the collection but am going to re-read it now!

Thank you, Afric. And congrats on the Hennessy win! N x