Happy new year, blog readers. I wish you all creativity and prosperity in 2014. I want to kick the year off as I mean to continue: featuring fabulous writers. I am delighted to start this first day of the year with one of my literary heroines, Mary Morrissy. Her new novel The Rising of Bella Casey is published by Brandon and it is a re-imagining of the life of playwright Sean O'Casey's sister Bella. The novel is beautifully written and moving; one of my top reads of 2013. 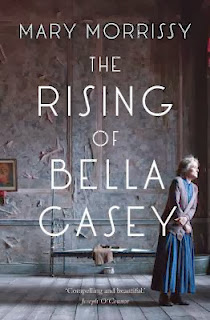 Mary is originally from Dublin and has won many awards for her fiction. She is the author of three novels, Mother of Pearl, The Pretender and The Rising of Bella Casey, and a collection of short stories, A Lazy Eye. She has taught creative writing at university level in the US and Ireland for the past decade and is also an individual literary mentor. She currently teaches on the MA in Creative Writing at University College Cork. Mary blogs here.

Welcome, Mary. Your novel The Rising of Bella Casey has been well received, gaining excellent reviews in The Irish Times and on RTE's Arena programme, among other places. Tell me about the genesis of the book.

Thanks, Nuala, for the invite to appear on your blog. I first came across Bella Casey’s story in The Glamour of Grammar, an academic book on Sean O’Casey’s Dublin trilogy, by Colbert Kearney – who also happens to be my better half. He made reference to Bella’s life and the fact that O’Casey had written his sister out of his autobiographies. I can still remember the moment, and that special tingle you get when you recognize the spark that will ignite your next novel.

A novel like this takes a lot of research. How did you enjoy the research process and how did you conduct it?

I started off by reading O’Casey’s six volumes of autobiography, as well as his three volumes of letters.  I also read the many biographies of the playwright. I was lucky enough to be awarded a research fellowship at the Cullman Centre for Writers and Scholars at the New York Public Library, where a lot of O’Casey’s papers are held, including fragments that he cut from his autobiographies regarding Bella. Because I was surrounded by so much research material at the NYPL, I approached Bella in a different way. Usually I write first, then do the research; this time I did the research first. Normally I don’t like research but you couldn’t possibly not enjoy working at the haven that is the NYPL.

I learnt a lot reading the book – I wasn’t aware that Seán O’Casey was a Protestant, for example. What is the novelist’s responsibility to the truth, especially when there are real people involved?

Protestantism is crucial to understanding O’Casey – and Bella – if only to understand how far O’Casey travelled from his roots. Here’s a man who became a nationalist, Irish speaker, socialist, communist and atheist and who wrote in complete opposition to his own tribe. As for responsibility to the truth, I think what the novelist should be most concerned with is emotional truth. I have a rule of thumb about writing about real people – which I’ve done a lot of. Where the facts are known you should stay faithful to them; where they’re not you are free to invent.

I loved Bella. Her fall from grace – though she always retained a pretence of dignity – was hard to witness. Were parts of the novel difficult to write, in an emotional way?

It was all difficult to write! This novel had a long, hard genesis. But there were times when I felt a little like O’Casey in dread of Bella’s decline. I wasn’t just witnessing the decline but actively subjecting her to all sorts of trials and tribulations. But apart from the attentions of the wicked Reverend Leeper, which is speculative on my part, all of Bella’s other misfortunes were true, so I had to stay true to them.

Reverend Leeper is a convincing villain; Bella’s husband is also not an endearing man. And Seán comes off as self-focused and lacking in empathy. Is this essentially a book about gender and women’s lack of choice?

Well, I’m glad to hear that the Reverend Leeper is convincing as he is the only one of the  main characters in the novel who is totally invented. (O’Casey mentions in passing in his autobiographies a reverend at Bella’s school who was demanding, but it is not specified in which way; this provided me with a narrative opening to create Leeper.) Bella’s husband, Nick, is brutish but I hope that readers might feel some empathy for him given that he, too, is trapped by circumstances. O’Casey was what we would consider very judgemental about Bella’s fall from grace but you have to remember he was an Edwardian man with the morals of that era. My feeling about his rendering of Bella in his autobiographies is that he adored his sister and when he wrote about her he was fuelled by a savage disappointment in how her life had turned out. There’s no doubting that the novel is feminist in that it focuses on the plight of a well-educated young woman who can’t save herself because of the society she finds herself in. But I like to think it’s also about the men in that society who were similarly ensnared by lack of education and poverty.
The cover, which is lovely, shows Sinéad Cusack in the 2011 Abbey Theatre production of Juno and the Paycock. Did O’Casey base Juno on Bella?

The photograph by Mark Douet is beautifully atmospheric, isn’t it? I can’t say for sure that O’Casey based Juno on Bella – I think it more likely that O’Casey’s mother, to whom he was devoted, was the model for Juno. But there are certainly elements of Bella in the younger female characters in O’Casey’s plays. Take Mary Boyle, for example – an idealistic young woman whose ambitions are dashed when she finds herself pregnant. Nora Clitheroe’s romantic notions in The Plough and the Stars owe something to Bella, and Susie Monican in The Silver Tassie has some of Bella’s haughty high-mindedness. And Bessie Burgess in The Plough as the sole Protestant in the tenement could well have been a nod to Bella in her later years.

The language of the book is fantastic – a lively Dublinese peppers the pages. Did you have fun recreating the bawdy, colourful language of early 20th Century Dublin?

I picked up a lot of the vernacular of the novel from O’Casey’s plays, the tone in particular. For Bella, I used a more formal diction and ran fragments of Shakespeare through her speech to indicate her schooling and her cultural aspirations. That was less of a stretch since my own parents would frequently smuggle Shakespeare into their everyday conversation and it took me years to realise where those quotations came from.

Why do you write?

Because I can’t not.

What is your writing process – morning or night – longhand or laptop?
First draft in longhand and late afternoon into the night. I was a night worker for years and I still keep those kind of hours.

You write short fiction as well as novels. How do you find the writing of shorter vs longer work?

I found the transition from short stories to the novel really difficult. After years of compressing language and time, as the short form demands, it was a real struggle to maintain a narrative over 250 pages. Now after writing several novels, I find that my stories are much longer than they used to be.

Who are your favourite women writers and why?

Carson McCullers and Flannery O’Connor because I found them in my teens and they excited my passion for fiction. Alice Munro for the density and complexity she has given the short story form. Elizabeth Hardwick and Shirley Hazzard for the way they wield language.

What one piece of advice would you offer beginning writers?

Write a little and often.

What are you working on now?

I’ve just finished a collection of linked short stories and have started work on a new novel – but it’s too early to talk about it.

Thanks so much to you, Mary, for the interview. Readers, you can buy Mary's wonderful novel here. And check out her blog for lots more interesting insights into the book and its making.
Posted by Group 8 at 13:35

Yes, Mary's answers are great - full of info and insight. I highly recommend the book.

A really great interview. A woman caught by circumstance, patriarchy, and fear. I very much liked Mary Morissey's insight into Bella and her words on the writing process.
Great questions, Nuala.

Why, thank you, Miss Foyle! Mary M is one of my literary heroines - it was an honour to feature her here. Thanks for reading and commenting. N x